the experience gained me invaluable access inside a highly successful and cutting edge international media company, and was a wholly rewarding and exciting experience.

i pitched and polished stories that were eventually published on the broadly website. by working through this process i was able to further refine my interviewing and writing skills, while learning to cater for a target audience.

in my time at the vice office i was able to work on video, content creation and seminar ideas which were subsequently used by broadly in the publications wider work.

i still continue to write and contribute to broadly.

you can see my contributor page here.

how to take the perfect nude selfie, according to a photographer

we asked a professional to share their tips and tricks to perfecting the art of the nude selfie.

The lighting is horrific, you’re contorting your body to mask the towel rail, and your selfie-stick (arm) is threatening to pop out of its socket. The naked self-portrait is no easy feat, we know. But, says fine art photographer Lauren Naylor, there are ways to transition into the world of the tasteful nude. The first step, Naylor says, is to choose somewhere you feel extremely at ease with your surroundings. “In your home or your bedroom, or somewhere you feel comfortable enough to let go and get into it.”

Naylor, who started shooting nudes when she found clothing distracted from the raw sullenness she aims for in her work, says the next step is to set up your DSLR camera (beg, borrow or steal), and hopefully also a tripod. Then you can make the magic happen. But do a test shoot first—and, importantly, choose a concept that speaks to you.

“The concept could be as basic as being on the floor naked, and then experimenting with that,” she says. “Don’t worry about getting too technical at this point; just get a feel for the framing of your image, and the kind of mood or design you’re going for.” 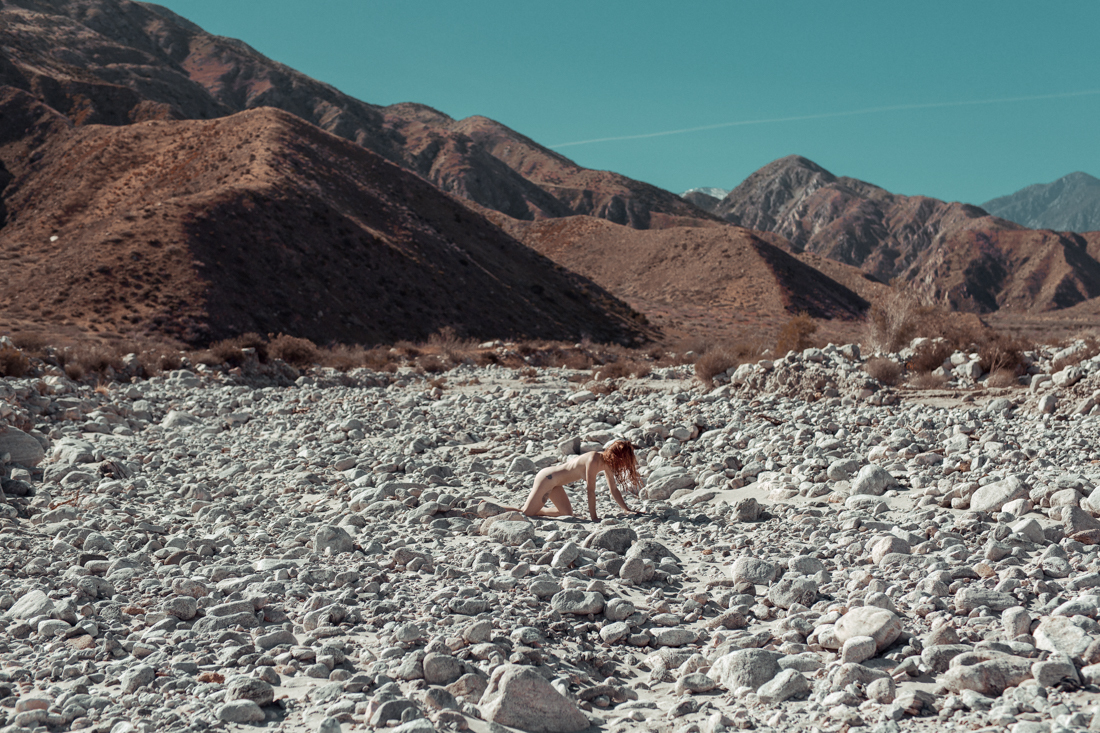 Once you’re ready to get down to business with your DSLR, “You can start worrying about other things like focus, lighting, and exposure.” Some of the technical aspects will come down to trial and error, but Naylor’s biggest tip is to nail the focus. If you’re by yourself, she advises, it helps to have a focal point in the image that you always go back to. If your face is in the image, for example, focus on your eyes in order to keep them “crisp.” Otherwise, play around with what you want to draw attention to.

Naylor also suggests natural lighting, but if inspiration strikes at 11pm and the moon isn’t cooperating, try some regular household lamps. “You don’t [need] expensive equipment,” she says. “Two lamps are all you need to make some sort of light source happen.” A $10 remote for your camera is great, too, so you don’t have to keep running back and forth from your set-up to your pose.

If, like Naylor, you want to try your hand at photographing your naked self out in the wilderness (here’s some inspiration), it might be worth dragging a helper along to press the shutter or fend off passers by. Outdoor shoots, she says, can be some of the most invigorating. 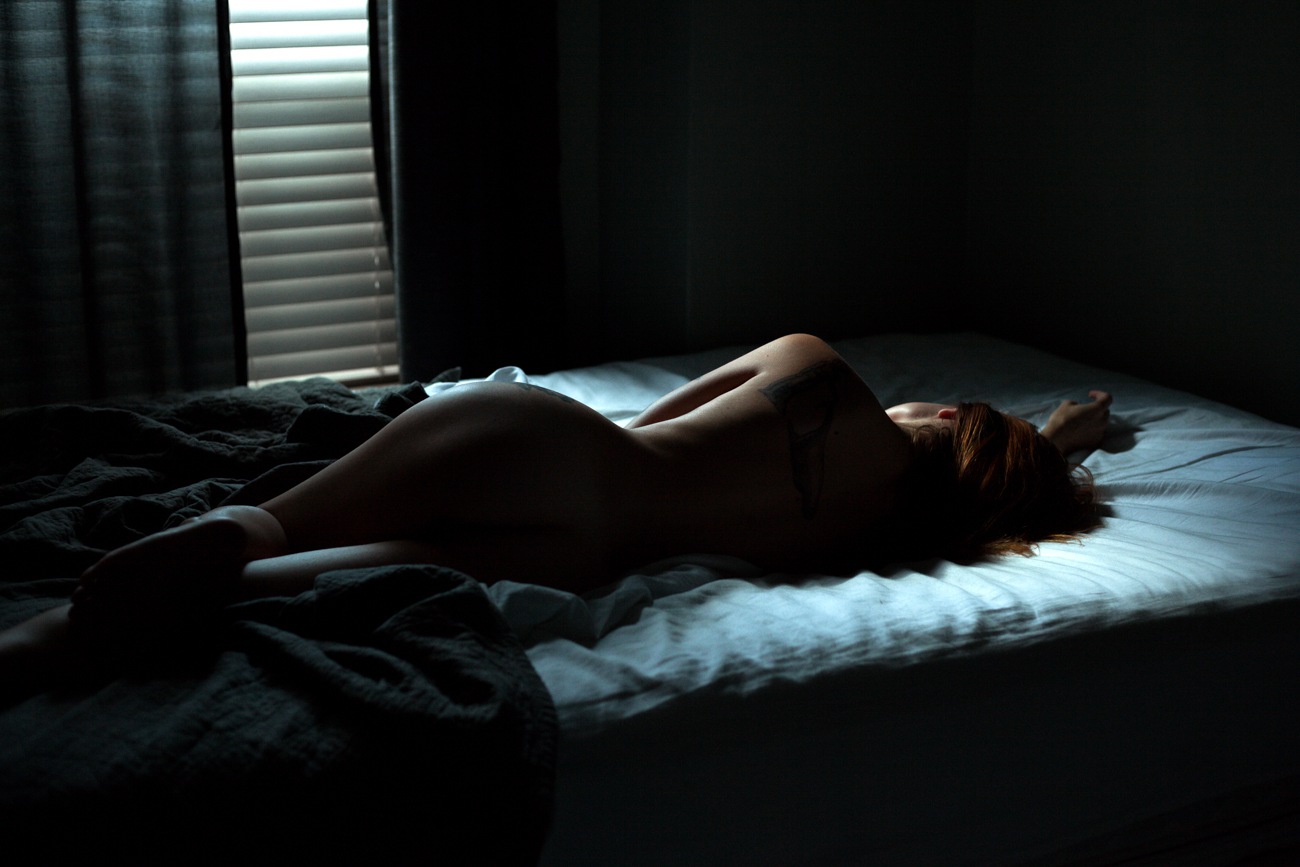 “It’s definitely scary, it’s kind of an adrenaline rush, and I like it for that. When you know that there is a chance someone is going to come by, it’s very fast and you don’t really know what you’re going to get afterwards. [You’re] just posing and hoping you get something good, and usually you do.”

No matter what approach or mood you choose for your next nude picture, regardless of who it’s for, follow this guide and you’ll be rewarded with the raw excitement a great nude can bring.

yes, you can get pregnant when you’re already pregnant

just another thing to keep you up at night.

In 2016, when Australian couple Kate and Peter Hill gave birth to two healthy girls born just ten days apart, the medical community took note. The duo had been trying to get pregnant for some time, but due to a case of Polycystic Ovary Syndrome (PCOS) were told that may never happen. When it did, and Kate conceived twice in just over a week, they became a textbook example of a rare occurrence known as superfetation.

Fortunately, superfetation is as uncommon as the title sounds, and surprisingly quite harmless. Dr. Sherry A. Ross, an obstetrician, gynecologist, and author of She-ology, explains the process bluntly: “A woman ovulates, she gets pregnant, she creates an embryo, and then a few days or even a week later she ovulates again, and then gets pregnant again, creating a second embryo.”

It sounds similar to twins, but Dr. Sherry says it’s entirely separate biologically, as the eggs don’t become fertilized at the same time. The difference in developmental stages for each fetus is also usually a week to 10 days apart—but can be up to several weeks—because the two embryos come from two separate waves of ovulation.

The reality is that women’s bodies typically stop this from happening, making superfetation a scientific anomaly and something that medical practitioners are still trying to get their heads around. As Dr. Sherry puts it, “Doctors especially like hard facts; they like to show a trail as to how this actually makes sense, and I think that’s sort of what makes this a mystical entity for the medical community.”

According to Dr. Sherry, when a woman becomes pregnant there are certain biological processes that are triggered, resulting in a few core reasons that this phenomenon (in the vast, vast majority of pregnancies) doesn’t happen. Firstly, “If you were to get pregnant during your ovulation, then you’re ovaries shut down and they should not ovulate anymore … You get pregnant, your eggs [are] fertilized, and then your ovaries stop producing future follicles.”

Another reason is that when a woman becomes pregnant she creates a “mucus plug” which forms in the cervix after conception, and “prevents sperm from entering the uterus for that second egg to get fertilized.”

Despite all of this, there have been a handful of recorded cases over the years and across the globe. Kate and Peter Hill were receiving fertility treatment, which Dr. Sherry says could have been a contributing factor to their case of superfetation. “[If] you’re getting fertility treatment, you’re defying what typically happens in your body,” she says. According to Dr. Sherry, this possibly resulted in the hyperstimulation of Kate’s ovaries.The most surprising part of the Hills’ story is that the couple is adamant they only had sex once.

As for becoming pregnant by two different men at the same time, is that feasible? “Yep, it totally [is],” Dr. Sherry says. This also extremely rare phenomenon is called heteropaternal superfecundation, and occurs when two ova meet two sperm, from two different parents-to-be, creating two embryos (homeopaternal superfecundation is what happens when one parent fertilizes two separate ova).

If this has made you swear off pregnancy forever, there’s really no need to worry. Dr. Sherry stresses that it is all beyond rare, and even when it does happen there are usually no more complications than a regular pregnancy. That said, it’s still unexplainable. “Some medical phenomenons you just can’t explain,” she says, “and that’s okay.”

View all posts by elsiejeanbath

find what you’re looking for